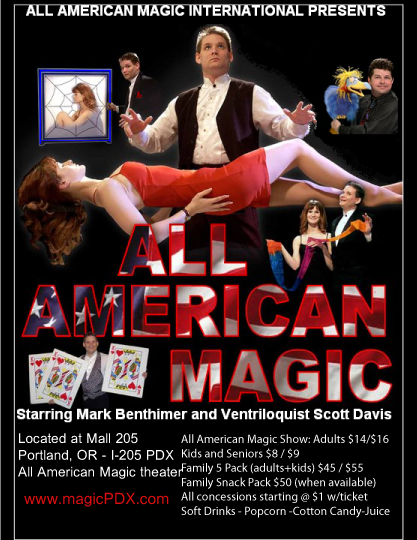 Get ready for two hours filled with head-scratching illusions, music and the hilarious comedy magic of Mark Benthimer and Ventriloquist, Scott Davis.

This amazing show is filled with mind bending illusion, music, dazzling assistants , audience participation, plus the side splitting antics & ventriloquism of Scott Davis, entertainer extraordinaire. Fun for the entire family !
Illusionist Mark Benthimer, who's credits include performances at the Portland Center for the Performing Arts, The TrailBlazers and casinos nationwide ,has also shared the stage with Blues Traveler, Sammy Hagar, and many more.

Come hungry...The theater boasts Portland's Best Snack Bar deals with cotton candy and popcorn for a buck, Hot Pretzels, Nachos and more ! PLus there is plenty of free parking and a Magic Shop a few doors down in the Mall. Buy your tickets in advance online because the show sells out almost every time!